From an old mentor’s tale and an unexpected missionary doctor’s manuscript, the story of a numerous family belonging to the southern middle class takes shape.
In the timespan of one hundred years, the fortunes of men and women belonging to the same dynasty become ‘an incredible story, which is true like the fury of the wind, like the Maestrale voice.’ And in the background, a magnificent Sicily and Africa, that is closer than we could ever imagine.

The story of this novel is inspired by real events. This tale also represents the only trace left about an epic which goes beyond the Sicilian boundaries; in it we can find both notable personages and less famous faces, which give authenticity to the story.
This is the most recent story of the Italian pasta, whose origins go back to the Kingdom of Sicily and to King Roger II.

I wish someone would decide to visit Eritrea in the future and, once in Keren, turn where the Afabet crossroads is, reaching the St Maryam Deari Chapel, which lies in a baobab tree. There, hanged at the bark of the tree, there’s a typewritten tale. And I also wish this traveler would go on top of the hill which overlooks the whole city, crossing then the threshold of the Heroes’ Cemetery. He would be received by an old Askari, who was a child seventy-five years before; now he lives there and will show the traveler the tree-lined roads of the small war memorial. On the right, there are the natives’ graves; on the left, the Italians’. In the middle lies an Italian brigadier general and his soldiers. Above those heroes, the Italian and Eritrean flags fly in the savannah wind.

The novel reveals the desire of giving voice to the best part of the southern people. These persons are the men and women who, with their lives, have left to the new generations a positive message, starting in fact the agroindustry and the most famous Made in Italy.

At the same time, the protagonists live their loves and disillusions, their successes and defeats, according to their personal ideals. The Maestrale voice descends on the events like a soundtrack, pushing life towards those values and virtues that make of it a sacred good.

The baron of Mezzocannolo, the main character and hero of this story, beat the evil and pushed it away. And this is why he was happy and free 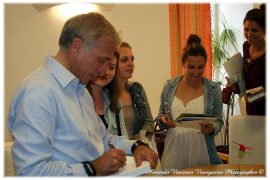