Nunzio Russo with a great act of love for the truth and the culture about  the pasta, the Queen of the Mediterranean diet, the intangible cultural heritage of humanity, Unesco 2010, donated the oldest documents of the Russo Pastificio to digital archive of Reggio Emilia, maintained by the University of Modena and Reggio Emilia, making it accessible to students and researchers. The Reggiane, in Reggio Emilia, were the suppliers of equipment by which they produced the raw material of Sicilian pasta and were the builders of an industrial machine, the groats cleanser, which for years helped to produce pasta in Termini Imerese in Sicily. The Purifier today has returned to Reggio Emilia thanks to Nunzio Russo, and is exposed at the entrance of the Technopole Reggiano of Unimore. Every time you hear the Maestrale blow, definitely Nunzio Russo is in a school, at a Conference, at an exhibition of books, among the people to tell his story, his family’s history, the Sicily’s active history, the pasta’s history that much freedom could have continued to give. 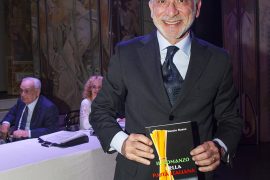